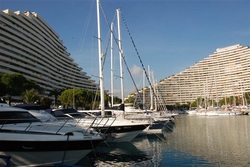 Villeneuve Loubet Tourist Information
Ever wondered as you fly into Nice Airport from the west what those four wave shaped buildings are? This is Port Marina Baie des Anges, Villeneuve Loubet - now a listed building. It was started in the 1960's and was developed over 25 years. The 1500 luxury flats have a shopping centre - open to the public - which includes bars and restaurants and a supermarket which caters for all nationalities, including the British selling English marmalade and Hob Nobs. The inhabitants are owners, second homers, holiday makers, and one block is completely time-share.
On each side of the complex are stony public beaches and one sandy one with many facilities for eating and drinking.
Over the railway which runs from Nice to Cannes, the main road is flanked by large stores including La Halle for children's clothes and C&A for all. 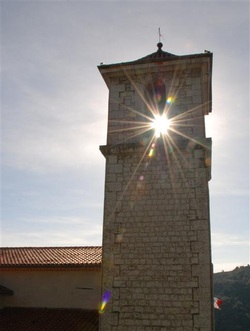 The Provencal village of Villeneuve Loubet is a mere three kilometers inland but a complete contrast to the commercial coast. It is the birthplace of France's greatest chef Escoffier and the house where he was born is now a museum to gastronomy.

There is a medieval castle in Villeneuve which Francis l visited in the 16th century and who ruled France from here for three weeks.

Kids' Paradise
Along the River Loup are picnic areas. On the route de Grasse (RD 2085) you will find fun for the kids from two years old as well as for the parents.  Adventure is to be found in the Canyon Forest with 160 tree top challenges of monkey bridges, rope swings and rock climbing and, if that is not enough, there is a four kilometer maze.  Plus you will find Le Bois de lutins and Pitchoun Forest. see their websites: www.leboisdeslutins.com  www.canyonforest.com
Friends with small children highly recommend this place... especially the dads!

Also there are lots of walks in the area - ask at the Villeneuve tourist office  http://villeneuve-tourisme.com/