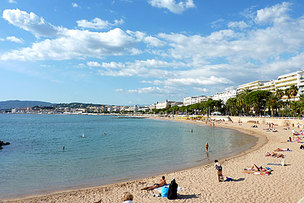 Warning: Smoking is prohibited on two beaches:  Bijou Plage, near Port Canto, and Les Rochers at La Bocca - 11 euro fine if you do!
​
In the centre of Cannes there are seven and a half kilometers of wonderful yellow sandy beaches but did you know... Cannes spends millions of euros each year reclaiming sand washed out to see every winter.  The depth of the beaches along the Croisette has gone from 25 to 40 meters.  It has taken two years and 80,000 cubic meters of sand.
In addition, all the private beaches have been remodelled to make them more attractive with the restaurant buildings now demountable and more able to withstand the storms. Most have been completely rebuilt. They also have lifts which will take a wheelchair.

Did you know... there has to be two meters space between the water's edge and the sunbeds on private beaches to allow people to walk by.

Scattered among the private beaches in town are public beaches,  including Mace and Zamenoff where you can hire sunbeds and parasols at reasonable prices. They have lounge areas but no food or drink is sold on them. Open from 1 June.  Other public beaches are Roubine, Rochers, Nadine, Pointe Croisette and Gazagnaire.  All the public beaches have handrails embedded into the sand to allow people to get in and out of the water easily. There are also lockers available.

Each summer the town protects bathers from jelly fish with special nets along the Gazagnaire, Mace and Roubine public beaches. They are in place until the end of September
Many locals head for the miles of public beach along the bd du Midi and a well kept secret is les Rochers (opposite La Bocca railway station) which is great for snorkelling. Take some bread and the fish will eat out of your hand.

​There is also a special beach at Bijou Plage for handicapped people - look out for Handiplage.
You do have to have written medical proof of your disability to use it. 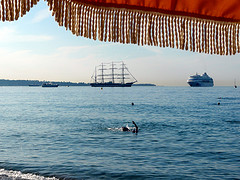 There is a 550 meter long underwater barrier which acts like a coral reef -  you can often see people standing on it - to prevent massive waves hitting the beach along the Croisette in the winter.  It cost almost 1.5 million euros and is unique in the south of France.

The town has planted scores of palm trees on the public beaches to provide welcome shade. Last year nineteen new palm trees were planted on the beaches to replace those damaged by winter storms and salt water. The original palms go to a nursery to recuperate. Aah!

There are 81 showers plus waste bins and loos available.  Cafes (kiosks) can be found all along the 15 kilometers of Cannes coastline:  from Mourre Rouge at Palm Beach to Trou de l'ancre at La Bocca on the border with Mandelieu. There are 60 people in summer to look after your safety on the beaches including lifeguards and police, until 15 September.

There are beach lending libraries, Pages a la Plage, at Plage Mace and Zamenoff.  They do now have some English books and magazines.  Why not offer them your finished English books?  Open summer only

Did you know... 5,000 "beach ashtrays" are handed out in July and August in an effort to stop people littering the beaches with cigarette butts. The French government is considering banning smoking on all French beaches due, they say, to the high clean up costs... so put your fag ends in a bin or take them home. Please don't bury them in the sand. 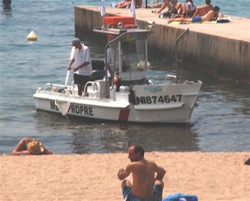 Clean up boats
Did you know...It's illegal to make love on the beach - day or night - or in any public place.  Since 1990 it's also illegal to take a midnight dip, play ball games after midnight or to sleep on the beach.

Private beaches are not cheap but they are so Cannes it's worth splashing out for a day, or half day: try out L'Ecrin on the Palm Beach side of Port Canto. It's also great for a drink.  All the beach restaurants are good, they have to be, but you will find your own favourite.Try Rado opposite the Miramar.

Cannes beaches have sprouted poles topped with a variety of brightly coloured designs such as fish, boats and bananas. The aim is to reunite lost children with their parents. Lifeguards hand out (or pop in to the nearest poste de secour) plastic bracelets for children to wear - parents write on their name and mobile number - and you tell your child to go to the nearest totem pole if lost.
Its the idea of a Belgian, Dominick Vervaecke - now you do know a famous Belgian.

If you can't stand kids, stay away from the poles!