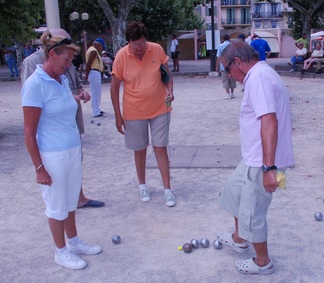 The game is played from alternate ends of an alley. The object is to amass points at each ‘end’.  The winner is the team which first achieves 13 points.
You can play it with one, two or three players on each side.  With teams of one or two players, each player has three boules whereas for teams of three players, each has two boules.
Each ‘end’ starts with the little wooden jack (cochonnet)  being thrown a distance down the alley. The first player throws his boule.  A member of the opposite team then throws his boule. Whichever is nearest to the jack is ‘holding the point’. The team not ‘holding the point’ throws another boule and the game continues in the same way - always it is the team not ‘holding the point’ which throws a boule.  When all boules have been thrown, the boule nearest the jack earns a point for its team. If the same team has the second nearest boule, two points are scored.  No points are scored by the opposing team.
Tip:  Hitting an opponent’s boule is very much a part of the game, as is hitting the jack.

There are all sorts of rules about choosing the throwing place, how far the jack may be thrown and how long between throws.  If you are interested consult Brief Rules of Petanque.
If you want to know when a boule is out of bounds, what constitutes bad behaviour during a game and the penalties for late arrivals, go to a 10 page document at Official Rules of the