​Frejus was once the most important port in the Mediterranean. Founded by Julius Ceasar in 49BC, and named Forum Julii, it still has many Roman sites including the amphitheatre (see below), a theatre, remains of an aqueduct and two gates. After the fall of Rome, Frejus was repeatedly sacked by Muslim raiders and left in ruins and the port silted up.
​ 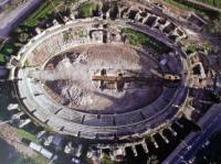 ​The medieval city later started to take shape. A cathedral was built on the remains of a Roman temple in the 5th century and was completed in the 11th and 12th centuries. This was the seat of the Bishops of Frejus - one went on to become Pope John XXll, 1316-1344. Today the cathedral is a must on the sightseeing list.  The Baptistry (5th century) was only discovered in 1925.

You go by train from Cannes (23 mins fast train, 45 mins stopping train) or by car 37km along motorway A8.  Start at the Frejus tourist office whose staff are very helpful and speak understandable English.
Open 9am-7pm every day during July and August, open 9am-6pm Monday to Friday and 9.30am-12.30pm, 2pm-6pm on Saturdays in June and September.  During the winter it's 9.30am-12pm and 2pm-6pm Mondays to Fridays.
See Frejus tourist office: http://www.frejus.fr