Even More Sightseeing in Cannes 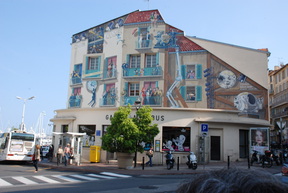 The movies, not surprisingly, are the theme of the 15 painted walls to be found throughout Cannes. Conceived in 2002 by the local council, the first four were inaugurated in 2004.

The one most people see is near the bus station (left) and depicts 100 years of cinema. Can you spot Mickey Mouse and R2-D2 or Batman and Superman?

Cannes' film-car museum mural at the Berthelot car park, in Republique, features Mad Max to Starsky and Hutch, Bonny and Clyde to Ghostbusters and many more.

Silence, Action! at 7 rue des Suisse celebrates the men and women behind the cameras. 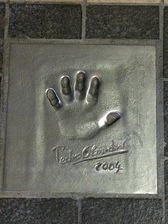 It is during the Cannes film festival that Nadine Seul chases after the biggest star names in the world to ask them for their handprints - must make a change from autograph hunters. About 375 hand prints have been taken since 1983.

The stars press one or both hands into a block of clay. This is sent to a potter in Vallauris who makes a plaster mould which, in turn, goes to a foundry in the Rhone.

The mould and the shiny new stainless steel handprint then return to Cannes: the mould to the bowels of the Palais des Festivals and the hand print to the Allee des Etoiles which snakes around the Palais.

In the Great Artists' Footsteps...

Painters have been attracted to the Riviera for many years.  As a celebration of this, photographs of their paintings have been installed in the places they were painted.
This Picasso is to be found on the Croisette near the Carlton Hotel, Cannes 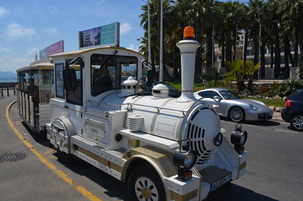 A great way to see Cannes is by one of the two motorised toy trains.  They depart from the Palais des Festivals, beach side, between 9.30am and 11pm. One train takes you around Le Suquet (old Cannes) and the other shows you the Croisette and the rue d'Antibes.  Each ride lasts 35 minutes and there is a commentary in one of eight languages including English. The one hour Big Tour includes the History and Croisette tours. New this year are the Cinema tour and the Night tour to see the sites lit up.

Take a tour of Cannes - one hour - costing 18 euros on an electric bike.
The two hour tour, 30 euros, includes a trip to the Croix de Gardes - a wonderful natural area which is known as the town's lung.
Rando Electrique can be contacted on 06 19 35 11 53


What to see guide for Cannes Day Trips to interesting places to Sightsee from Cannes such as Antibes, Golfe Juan, Mandelieu La Napoule, Mougins, Loup Valley, Théoule-Sur-Mer, Biot, Nice, Vallauris, Valbonne, Ventimiglia and Adventures further afield to Verdon Gorges and Valley of the Roya.
WHAT'S ON IN CANNES 2022