The Canal de La Siagne, built in 1866, took drinking water from the River Siagne to Cannes via Grasse and Mougins and Le Cannet.  The part from Le Cannet to Cannes was covered over and now provides a path for walkers, joggers, runners and dogs.
The Cannes end is reached by 18 bus, from Cannes train station getting off at Paradis after 10 minutes.  Cross the road and walk up ancient chemin de Vallauris.  A short way up you will find the path. Turn left and walk the two miles to Le Cannet.  The last bit of the route has numerous steps down to Le Cannet. 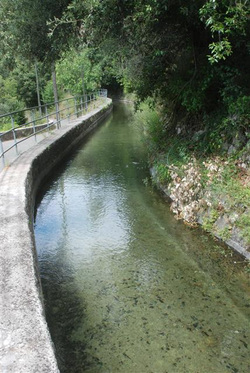 Another example: when I arrived by bus getting off before Mouans Sartoux with Casino supermarket on the right just after a roundabout.  The walk starts by ascending Chemin du Vallon d'Aussel which led to a track at the top to the canal.
The 27 mile Siagne canal, was built by a British company in 1868.
I walked the four mile path along the canal from Mouans-Sartoux to Mougins.  Piece of cake - it's  downhill all the way isn't it?  Nope.  The first part was climbing a steep hill to get to the canal.  Two members of Rando Evasion, one leading and the other encouraging me from behind at a cracking pace displayed by ramblers the whole world over to reach the top.
We were given a breather there for two minutes and off we went, aged six to sixty eight (guess who?).  I admit this was easier after being overtaken by all except for the professional behind me - I am sure I heard the gnashing of teeth. The end was nigh - or so I thought - as the canal disappeared into a tunnel.  Nope. We were on a long busy road again walking uphill.  Thank goodness at the end of this hell we were allowed to stop, officially.
The next part along the canal again was a pleasure, which included an exciting aquaduct, only for the torturers to find yet another hill where again all the children overtook me.  I can tell you that the cold Coca Cola and sausage and chips which welcomed us at the Pré de Fontmerle was bliss and so was the pleasure of meeting fellow English hiker Jill.
I was met by car and I don't know if there is a bus nearby.