Tennis in Cannes - Where to play tennis 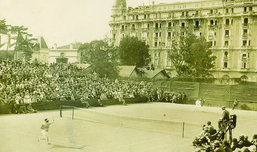 Tennis in Cannes circa 1920
In 1879 there was only one tennis court in France - in Cannes. It was built by Sir Thomas Robinson Woolfield, leading property developer in the town.  Tennis was adapted by Major Walter Wingfield in England six years earlier from the ancient game Jeu de Paume.  He wanted to call it Sphairistikè (Greek for ball games) but it became known as tennis from Tenez (here you are) spoken by the server just before serving.
By 1881 several courts were installed in the grounds of Hôtel Beau Site.

The Cannes Tennis Club, created in 1907, is very active today. Situated at 11 rue Lacour, just off Boulevard Général Vautrin, it has five hard courts (Dur) and two clay courts (Terre Battue) for hire
To book ring: 04 93 43 58 85. There is also a small snack bar.

Cannes Garden Tennis
The main municipal tennis club, Cannes Garden Tennis club, opened in September 2009 at a cost of 15 million euros. The complex includes 16 courts including four covered and four clay courts.  It has free parking and a clubhouse. Tennis lovers can find it at 99 Avenue Maurice Chevalier near Agapanthus bus stop about 20 minutes from Cannes Town Hall by No. 2  bus, in the direction of Les Bastides.
Courts can be hired by the hour and tennis lessons are available for adults and children. Ring 04 93 47 29  33
​
The other municipal club is at Montfleury Palm Bus 7 - lovely setting near the swimming pool.  Tennis lessons also available.