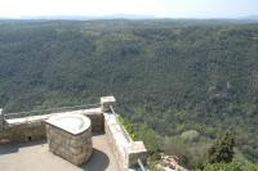 Village viewing point
This village dates back to Roman times and is untypical of the usual perched villages in the Alpes-Maritimes.  If you have a car do visit it and the Grottes de St Cezaire – about 30 km from Cannes.  Drive towards Grasse and before entering Grasse itself take the D2562, direction Peymeinade. St Cezaire is signposted off this road onto the D13.  You will arrive at the grottos before the village.
​
Autocars Musso also provides a number of tours, including a half day to the grottos of St Cézaire. 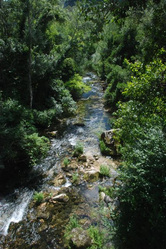 River Siagne below the village
A few minutes drive from the grottoes and you arrive in the village where it is easy to park. There are several cafes, bars and restaurants located around the 1720 church in the centre. There is also a green metal fountain built in 1860 to provide fresh drinking water all year round. The chateau was built in the 14th century and the Mairie is located in part of it now. The large lavoir (wash house) was constructed at the same time. Many of the houses in the old village date from the 15th and 16th centuries. While typical of the region, they are much taller than usual and the streets wider and straighter.
From near the front of the church follow the signs to the Point du vue, passing through a small square with a huge horse chestnut tree. The viewing point is on a terrace – where the Roman granary was located. The view is simply stupendous and surprising.  St Cezaire is only perched on one side where it overlooks the deep, forested valley of the Siagne, the border between the Var and the Alpes-Maritimes. There is a viewing map table on site.

Roman sarcophagus
Returning to the church, walk to the rear of it up the rue de l’Egalite towards the 12th century Chapelle Notre Dame de la Sardaigne.
Just inside you will find a rare Roman sarcophagus – and no the youth was not that small, it held his ashes. The church itself is beautiful in its simplicity and form.
The St Cezaire legend is that Julius Ceasar in 49BC set up an observation point at this village which dominated the gorges de Siagne. It is also said Ceasar himself ordered the construction of the granary. The bridge, the Pont de Tuves, was constructed and it is believed the Romans brought the olive tree to the area – today an important source of wealth for the locals. The village was an important agricultural area between 2BC and 5AD. All mention of St Cezaire is lost then until 1101 when it appears in the writings of the monks of the Abbaye de Lerins.

NB For ramblers there are many walks in the area. Pop into the tourist office for details.

Into the Valley of the Siagne

Siagne Canal
On returning to your car, take the road almost in front of the church and then the signposted Mons road.  You will descend to the river Siagne passing the Siagne canal on your right. Once over the bridge turn left, where you can park.  Walk down to the river, where people picnic and paddle, or walk back to the bridge for some good photo opportunities. You can then continue in your car alongside the river towards Callian – a very pretty old Var village.

Then on back to Grasse or to the A8 motorway to return to Cannes.

The water from the Siagne, via the canal, still provides water for Cannes. It is very pure.