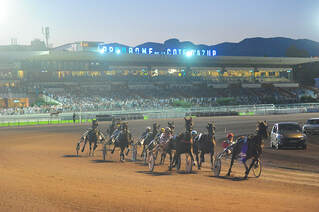 Actually it's in Cagnes sur Mer.

The summer horse racing season starts July - 24 August 2020  Since it is summer and hot, most meets are in the evening and it is the trotting season. There are fireworks five times in July and the closing night in August.

At most meets there are lots of activities for kids.

Entry is five euros and free for the under 18s. Parking is free. The full programme can be found on
www.hippodrome-cotedazur.com

Minimum bet is two euros and if you have never seen trotting do go, it's great. The horse leading the race may already have been disqualified for breaking its trot so hang on to those betting slips, you may have a winner when the official list goes up.
​
If you can muster between 20 to 40 people you can hire your own private terraces with chef and waiters.  There are two restaurants: Le Paddock and Le Pesage.  See www.hippodrome-cotedazur for full details and reservations.

It is the second biggest racecourse in France in terms of meetings.
Unfortunately the railway no longer stops at the Hippodrome and the nearest stop is the town station Cagnes sur Mer.   By car, exit the A8 motorway at junction 47 or take a leisurely trip along the coast.

​
There is also top show jumping. Two arenas have been built and there are two events - one end of March/early April and the second, end of September/early October.