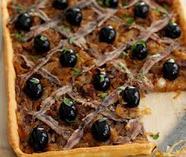 Looking for something very traditional to eat? Try the pissaladiere, said to have been introduced by the Romans, it is a type of local pizza but with no tomato and no cheese.  It is made with a bread dough, heavier than a pizza dough, or sometimes with pastry. The filling is delicious caramelised onions, garlic, olives, and anchovies. It is now often served as an appetiser but was originally an early morning snack.  If eating it at home try it with rocket salad. You can buy pissaladiere at most bakers.

And did you know the famous Tarte Tropezienne was created for the film crew of And God Created Woman, starring Brigitte Bardot, by a patissier in Cogolin, near St Tropez.
The original recipe is still a secret although most shops have their own version of it.
Try it - heavenly.