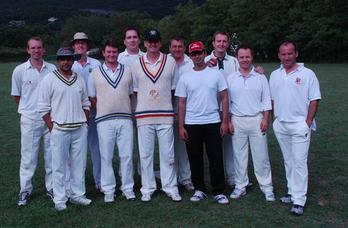 Cricket on the Riviera - Near Cannes
Yes there is a cricket club in the area.  It's the Riviera Cricket Club but it's not on the Riviera - just 40 minutes away from Cannes in the coolness of St Vallier-de-Thiey on the Route Napoleon (N85) to the north of Grasse.  Formed 30 years ago the club plays teams from all over Europe.  The season is from April till October.  See the fixture list.


Cricket took place at the Summer Olympic games in 1900 when only one match was played. France gained a silver medal - its team consisting solely of British residents in Paris, mainly embassy staff.


Well here's a turn up for the books - the French are taking up cricket, in earnest!  Since autumn 2012 cricket is  taught in French primary schools and some schools will be teaching it in English. (Lord help 'em cos many English people don't understand cricket terminology).
Schools are looking for links with British and French cricket clubs by the way.