Eating out in Nice

food in Nice
Too many to mention - near the flower market, around the harbour and at Place Masséna, a tram ride from the station.  Pictured are two reasonably priced lunch time restaurants, Cafe d'Iris at 13 and Relais d'Asie at 11 Place Massena. 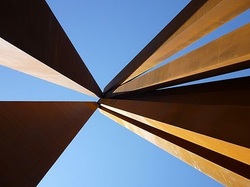 Nice 155+ Years with France
2010 saw Nice celebrating being part of France for 150 years. The French border with "Italy" was originally the river Var. Napoleon III  agreed to give military backing to Victor-Emmanuel II, King of Sardinia, in his war against Austria...but in return for the Comte de Nice and another trifle like Savoie. Nice became officially part of France on 11 June 1860 and the department of Alpes-Maritimes was created a few days later to include the Grasse region, originally in the Var, and Menton and Roquebrune, ceded from Monaco in 1848 to Sardinia. The current geography of the Alpes Maritimes was completed in 1947 when the residents of the villages of the Roya valley voted to join France.  They had voted oui in 1860 but remained part of Italy because Emmanuel wanted to keep his hunting grounds.

A monumental sculpture (see above) by Bernar Venet was erected to celebrate the anniversary - the nine columns represent the nine valleys in the Alpes Maritimes according to the mayor of Nice but M Venet, the artist, says it just happened to be nine that was the most aesthetically pleasing to him.