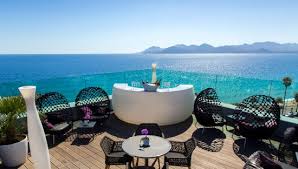 Radisson Blu rooftop bar
Bars & Pubs in Cannes
​
There are a number of rooftop lounge bars with great views. Try the roof terrace of the Radisson Blu hotel for the best views in town.
Next the Five hotel for great views of the rooftops of Cannes.
The 3.14 hotel offers drinks and a Lebanese restaurant - you need your passport here, part of the casino: views of the Med.
The KA club, on the rooftop of the casino near the old port. is open for after work/beach drinks and you can dance the night away. Stunning views across the old port to Le Suquet.

Irish bars are popular including The Quays, Ma Nolans and Morrisons.

Newish watering hole is California, opposite the Palais. It is the sister brasserie-bar to the famous one overlooking the harbour in St Tropez.

The apero – an early evening drink after shopping, work or the beach – was a tradition in the town with many bars offering mouth watering nibbles free with your drinks. Sadly, due to the lingering recession many places now charge for this calling it "tapas".
​

This is a Cannes institution and is only one of two all night restaurants - it closes at 5am. It has live music and its own very special fun atmosphere. It was founded in 1958, its heyday was the 70/80s but is now owned by two of Cannes' great nightlife gurus.

It is opposite the Martinez Hotel on the rue Latour Maubourg

The so called Gutter Bar is situated at 72 Boulevard de la Croisette, just across the street from the Martinez.  That's not its real name but the name given to it by journalists at the International Advertising Festival many years ago.  Mike Lynch - now publisher of Australian magazine, Campaign Brief - says: "We had to drink in the gutter.  It's a smart place now with lots of room inside but we - mainly Australians and Brits - still insist on drinking in the gutter".