Masks must be worn on the bus.
​
Palm Bus ticketing system allows contactless validation.  You can buy tickets from the driver.  They can also be bought from the bus stations, offices of tourism and selected tabacs.
It is now possible to pay on the bus by contactless payment with your bank card: CB, Visa and Mastercard. Just show your card to the driver before validating. If there is a crowd of you do it once for you, then a second time and this time punch in how many more tickets required. You can also pay with your smartphone by Paylib, Apple Pay, Google Pay or Samsung Pay.  Journeys cost 1.50 euros for a single journey.
​You can purchase tickets and verify payments and journeys on  palmbus.fr
Tickets valid for one hour.  Rechargeable tickets come in a plastic holder.  You can also validate by putting your phone in front of the machine.


Palm Bus has an office at the Cannes bus station, adjacent to the Hotel de Ville, where you can pick up details of bus itineraries, containing maps of the route. Cheap 10-journey ticket – two of you? just validate it twice - and other tickets can be bought at the bus station and single tickets on board.  All tickets are valid for one hour, so you can change buses using the same ticket but you cannot get back on the same number bus. If buying a ticket from the driver get on on the right side of the rail and if validating a ticket get on on the left side. In Cannes it is normal to say Bonjour to the bus driver and it is still expected that younger people will get up to let older people sit, and men stand for women to be seated.
That said there is still no such thing as a queue at the bus stop – it’s every man for himself (women usually win).

City Palm is a mini bus that travels in a circle from the Hotel de Ville (HDV) along the Croisette, on to the rue d'Antibes, pulling off for Gambetta Market, back onto the main shopping street and then to the railway station and back to HDV.  It stops on demand, whether hailing or alighting, as long as it is safe to do so or as soon as possible - as well as at bus stops.  Operates 9am till 7.15pm every 10-15 minutes
City Palm all-day bus ticket, which must be bought on board, costs 75 cents.  It must be validated on each journey.  The City Palm is free for one person using the town centre's municipal car parks - just show the car park ticket when boarding.

There is an electric minibus operating in and around Le Suquet, the pedestrianised old town. It runs every 20 minutes, from the bus station, 9am to 7pm inclusive and until 11.40 pm in July and August.  All day tickets cost 1.50 euros.

A free minibus in La Bocca takes you to the beaches.  You park at a car park or go on a normal bus to pick up the navette as it is called.

A bus runs all summer along the coast road from Quai Laubeuf stop in Cannes to Theoule.  There is now also a ferry to La Napoule and Theoule in summer.

The open topped, double decker Imperial bus is a great way to travel the Croisette to Palm Beach and back. It costs 1.50 euros or three euros for the circular trip. 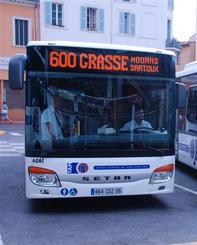 Bus tickets cost 1.50 euros. All tickets are valid for 74 minutes from when you get on so you can change buses using the same ticket up to that time.
The 200, which starts near the old harbour on the other side of the Mairie from the bus station, goes to Golfe Juan, Juan Les Pins, Antibes, Cagnes-Sur-Mer, Nice airport and Nice.
The 210 is the airport express bus and leaves from opposite the old harbour just south of the bus station..
Buses leave for Grasse via Mougins and Mouans Sartoux on the 600 (See times); Grasse, via Pegomas, on the 610 (see times); Valbonne via Mougins on the 630 (See times). Leave from bus centre at the railway station
See 200 timetable: this bus goes near the airport and to NIce