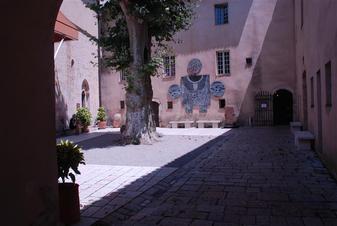 Vallauris Castle Museum
Vallauris is noted for ceramics, glass, the bitter orange tree... and Picasso.
The current town dates back to 1501 when it was re-populated - after the plague devastated the area - by people from the Ventimiglia region of Italy. It was already known for its pottery and glass. The town was rebuilt "chequerboard" at this time on the instructions of the monks of Lerins Abbey who owned it. Its name comes from Vallis Aurea which in the 11th century was a "villa" meaning a series of hamlets each with a chapel.
There has been a settlement here since Celtic-Ligurian times. The Romans came along and built a fort here which was in Provincia Romana (hence Provence).

The Castle Museum houses three museums: Picasso National Museum - War and Peace, Magnelli Museum; and the Ceramics Museum.  In the square outside is a rare publicly exhibited bronze sculpture by Picasso, Man with a Sheep. There is also the Llorca bistro in this square. At the bottom of ave Georges Clemenceau, lined with shops and potteries, is the Espace Jean Marais. The town is awash with shops selling pots, glass and ceramics. 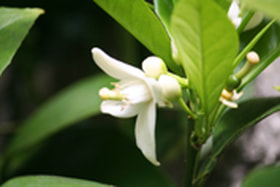 Bitter orange flower
Vallauris is the only town in France that still harvests and distills the flowers of the bitter orange tree, also called the Seville orange.
The hillsides around the town are home to thousands of orange trees which originally supplied the Grasse perfume industry. The flowers are hand picked in the spring. They have a spicy, bitter scent.
In 1904 the orange growers cooperative - Nerolium - was formed and today you can pop into Nerolium shop on av Clemenceau to buy bitter orange marmalade and other local produce.

Petanque / Boules
Examples of boules since the game was invented in 1907.  Pictures of famous players.  Advice on playing and purchasing a set of boules.
All to be found at the Petanque museum, 1193 chemin de Saint-Bernard, Vallauris tel 04 93 64 11 36
​NB Not in the town itself.